How Bicolanos Celebrate Peñafrancia Festival: Then and Now

For almost every Filipino, September is the beginning of the Christmas season. But for Bicolanos, it’s a month-long celebration in honor of its patron saint – Our Lady of Peñafrancia, as well as the image of Divino Rostro. Ina, as fondly called by the Bicolanos and devotees, is currently housed at Basilica Minore in Naga City. And during this time of September, different religious activities and other festivities are conducted in honor of her greatness and the countless help and miracles she has manifested to the devotees and in the whole region.

History of Our Lady of Peñafrancia

The devotion and history of Our Lady of Peñafrancia started way back in 1710 with Miguel Robles de Covarrubias. He is from San Martin del Castañar, where the original Lady of Peña de Francia was located. Her image was said to be miraculous and has cured many sick people since she was found behind the rocks and placed on the shrine. Miguel was a devotee of the image and brought his faith until he studied at the University of Sto. Tomas in Manila. One day, he got seriously ill. He always held a picture of the image and vowed that he would construct a chapel in honor of her when cured. He was then miraculously healed, and later on, he was ordained as a priest in the city of Caceres (now Naga City). This is where he fulfilled his promise and constructed a church built in stone. He also enshrined a replica of Lady of Peña de Francia carved in wood inside it. People immediately visited the shrine and attended novena and holy mass.

The tradition of Traslacion and Fluvial Procession began on September 1, 1864, when Bishop Francisco Gainza institutionalized these processions to spread the devotion to Our Lady of Peñafrancia. In 1905, the tradition was officially assigned to be celebrated on the Sunday after the Octave of the nativity of the same Blessed Virgin Mary. This remains to be the schedule followed until today. For the longest time, her image has been housed in her own shrine, the Our Lady of Peñafrancia Shrine. In 1981, during the construction of a church to be her new home, her sacred image was stolen. It took more than a year before her 275-year old image was returned to the Archdiocese. In 1985, the new church was granted privileges of Minor Basilica and later on, as National Shrine. This is now the home of Ina.

Ina is said to be miraculously curing sick devotees from serious illnesses and other diseases. She is also considered the protector of Bicol from every strong calamity like typhoons that frequently hit the region. Devotees won’t also forget to shout ‘Viva la Virgen’ and respond ‘Viva!’ right after for every celebration, or even every chance they get, may it be during religious events or festivities.

The celebration of the feast of Our Lady of Peñafrancia is a combination of religious and non-religious activities.

The festivities usually start with the 9-day novenario for Divino Rostro. The image is being brought to the old Peñafrancia Shrine, where the novenario is conducted. Its feast day is then celebrated on the second Friday of the month. September 8 is constantly celebrated through a holy mass to honor the birth of the Blessed Virgin Mary.

During the feast day of Divino Rostro, the Traslacion procession is also conducted. The image of Ina is first transferred at dawn to her old home in Peñafrancia Shrine in preparation for the Traslacion in the afternoon. A Mass is celebrated in honor of her arrival. A Pontifical Mass concelebrated to commemorate the Feast Day of Divino Rostro is conducted as well. Devotees who attended the procession will then prepare for the Traslacion. After the mass, the image of Divino Rostro leaves at a slow pace with the help of the voyadores. The image of Ina will then follow at a much slower pace. Hundreds of thousands of devotees join along, mostly on the street, trying to get closer to the image. Some are in their homes watching the Traslacion over their windows, waving white handkerchiefs and shouting “Viva la Virgen” with all their heart. The Traslacion ends at the Portae Mariae of Naga Metropolitan Cathedral, where another Pontifical Mass is celebrated before transferring the images inside the church. The nine-day novena for Ina starts as well.

During the nine-day novena, masses are also conducted daily. Devotees are now falling in line to get the chance to touch the image of Ina or wipe their handkerchiefs on the sacred images. This is also the time where they say their earnest prayers, most especially healing prayers.

At the end of the novena, the Fluvial Procession will finally be conducted. The images are carried in the streets until it reaches the pagoda where they will be transported back to the Basilica. The images will be escorted only by male devotees. Several bishops, priests, seminarians, and sometimes, public officials will be on the same pagoda as the images. Again, devotees and the voyadores will shout ‘Viva la Virgen’ and respond ‘Viva!’. Some are on several colorful paddleboats pulling the main pagoda, while hundreds are lined along the river bank, waving their handkerchiefs. The mass on the following Sunday, the Feast Day itself, finally concludes the religious activities in honor of Ina and Divino Rostro.

Two of the biggest and most anticipated non-religious events in the Peñafrancia Festival annually are the very vibrant Civic and Military Parade. It is usually conducted during the week after Traslacion. Contingents in the Civic Parade are from elementary schools, while High Schools and Universities from all over the region are the participants in the Military Parade. The participating majorettes and the marching bands wear fancy dresses representing their school's colors. The parade begins at the Panganiban Drive in Naga City and ends in Plaza Quezon grandstand, wherein they give a salute to the commandants, uniformed officials, local government officials, and the board of judges. A mini-exhibition will be showcased while their marching units are being scored for their overall performance from the parade until the eyes-right salute.

It's not only schools that participate in the parade but also different organizations and companies in the city. Right after the Civic parade is the Annual Float Parade, where participating sponsors, mostly from different companies, design very festive and colorful floats representing them.

Participating High Schools or Universities and their delegates also compete for the Regional Band and Majorettes Exhibition, showcasing their talent through synchronized baton twirling exhibition and unique marching band performances simultaneously. Right after this competition, the Fancy Drill Competition takes place, wherein the Citizenship Advancement Training (CAT) Units from different schools perform silent yet breathtaking drills, handling wooden fake rifles with all seriousness at the beginning and end it with entertaining dance numbers. This activity stems from the original Annual Military Parade wherein top-performing contingents compete for the exhibitions. But since the participating schools in the parade kept increasing each year that the parade finishes late in the afternoon, it was decided to be conducted as a separate event from the Military Parade.

The Voyadores Festival is a street dance competition wherein the performances of the participants depict the activities of the devotees of Ina. Miss Bicolandia is an annual pageant participated by young ladies from different cities and municipalities in the Bicol Region, showcasing their beauty, elegance, and wit in answering questions. The Bishop Francisco Gainza Trade Fair, named after former Caceres Archbishop Francisco Gainza, is a trade fair aiming to promote local goods, products, and services participated by small business owners as well as established entrepreneurs in the whole region.

Those are only a few among the countless activities during the month-long celebration of the Peñafrancia Festival.

Due to the pandemic, almost all of these annual traditions are temporarily halted in order to abide by the minimum public health standards implemented by the Inter-Agency Task Force or IATF. The novenary, which is usually done inside the Peñafrancia Shrine, Naga Cathedral, or Basilica Minore, is encouraged by the Archdiocese of Caceres to be conducted by devotees inside their homes. Mass celebrations would also be done through live streaming. The Traslacion and Fluvial Processions are cancelled too. The images of Ina and Divino Rostro will remain at the Basilica Minore, and touching the images is also temporarily prohibited. The trade fair is conducted virtually.

It is the second year without the colorful banderitas hanging all over the streets of Metro Naga or any exciting events in every venue within the city. Bicolanos are celebrating the festival the way they used to, and deep in their hearts, they feel lacking. Nonetheless, the presence of Ina is still dominant and their faith in the Lord and Ina is what keeps them going, especially during these difficult times.

Doing things differently this time might still be a challenge, especially for the long-time devotees, but the devotees' love for Ina is constant, and the mercy of Ina to the entire Bicolandia is also constant. Hopefully, everything will go back to normal soon, and the Peñafrancia festival will be as grand, colorful, and deeply spiritual as before. 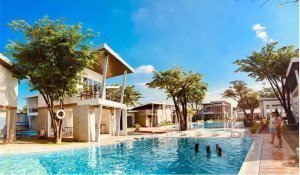 Here are the different resorts and beaches you can visit when you’re traveling to Tanza, Cavite. 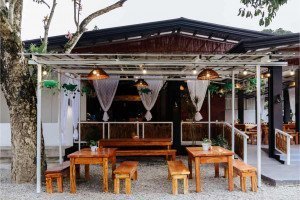 To start getting to know these amazing spots in the Crown City, here’s a list of the top five restaurants in Koronadal City that is near Lessandra Prima Koronadal: